Winches are a lifesaver for any off-road enthusiast, no matter how experienced you are in terms of dealing with rough terrains.

Even though all types of winches work in a similar way, they all come with different functions. A tighter budget on a winch calls for a hand-crank winch. They are cheap and require low maintenance.

Worm gear winches are quite popular among the best hand-crank winches.

If you are trying to get yourself a worm gear winch and you want to know how it works, then you have come just to the right place where we have worm winch gear explained.

There are many different types of winches available on the market.

They can be really helpful to get your vehicle out of any sticky situation, such as being stuck in a ditch, a swamp, or mud.

If you are out on rough terrain and your vehicle is stuck, winches can do all the pulling and lifting to recover your stuck vehicle in no time.

While hand-operated winches may be a cheaper option to go with, electrical winches offer you more efficiency and lesser work time.

Hand-crank winches can perform the same tasks as any other type of winch, but their weight capacity is limited.

They’re lightweight, adaptable, long-lasting, and they don’t require a lot of upkeep. It can accomplish all that other winches can do but at a slower rate.

As previously mentioned, worm gear winches are a noteworthy addition to the hand-crank winch family.

What Is A Worm Gear? 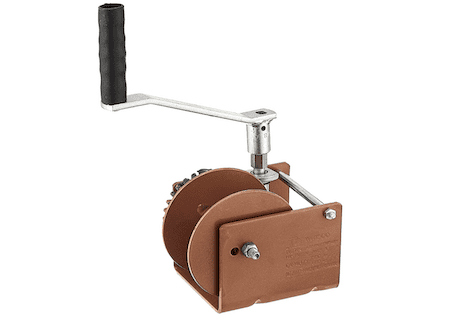 There are three common gears available for winches- planetary gear, worm gear, and spur gear. Today, we will talk about worm gear winches.

However, before jumping into what precisely a worm gear winch is, let us first look at the mechanics of a worm gear.

If you want to understand a worm gear winch, you must understand how the gear works.

Most people often end up mixing up these terminologies. We all incorrectly call the whole gear unit worm gear instead of just the toothed wheel the actual worm gear.

Since that is what we are most familiar with, let’s just refer to the whole unit as a worm gear.

In simpler terms, what happens here is that the worm (which is a gear that resembles a screw) meshes up on the worm gear wheel (which is the gear similar to the looks of a spur gear).

Similar to most other arrangements, the rotational speed is reduced, or higher torque is transmitted with worm gears.

This gear can differentiate itself and stand out from other types of gear by transferring its rotational movements by 90 degrees.

The worm gear is not a new invention. It is quite a simple gear arrangement and has been used for thousands of years worldwide.

Worm Winch Gear Explained: What You Need To Know

The high gear ratio of worm gear winches allows it to execute its function faster than other types of winches. Worm gears have a 500:1 gear ratio, whereas standard helical gears have a 10:1 or lower ratio.

As each rotation of the worm moves the gear 500 times, as opposed to the 10 rotations created by regular helical gears, this results in faster movement.

Compared to the other designs of different hand crank winches, worm gear winches come with a fewer number of moving parts.

This is also why many people know worm gear winches for their reliability and their longevity of use.

As we already mentioned before, you will face a lot fewer complications with the lesser number of parts your winch contains.

This is because the worm gear winches are self-braking winches. This means that the winch will stop immediately once you are not turning the crank any longer.

Also, because of the new and developed technology, worm gear winches can deliver you with line speeds similar to or almost as good as the standard hand crank winches that you can get on the market.

Why Should One Choose Worm Winch Gears?

You might question yourself if something this simple has any reasons to be chosen over other available gears. Well, there are plenty. One of these reasons would be being able to reduce the ratio.

The ratio can be reduced massively just by increasing the circumference of the worm wheel itself. You are also able to increase or decrease the torque by adjusting it accordingly.

You would need several different parts to achieve the same result with standard gear sets. This also means that gear would have more parts that would be prone to damage.

You should remember that gear becomes a lot more durable and efficient with a lesser number of parts.

One of the other reasons you would choose a worm gear over regular gear sets is that worm gears can’t change their power course.

This is because of the friction between the wheel and the worm, making it impossible for the wheel to change its course suddenly. Even if you were to apply force on it.

On any other gears, you will be able to turn its course separately if you can apply sufficient force onto it.

This can increase the number of complications for you since this means that you now need to attach a backstop to your regular set of gears.

With the countless benefits of using worm gear, would you expect any downsides to it?

Well, of course, everything comes with a few downsides. Some of the downsides that you would see from a worm winch gear are:

How To Lubricate Worm Winch Gears 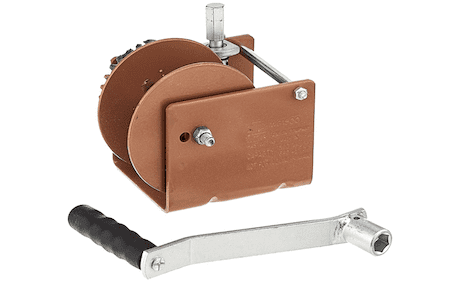 One of the biggest problems you will encounter with worm gear is how it transfers power. It can both be an advantage and a disadvantage at the same time.

While the spiral motion offers an excellent amount of reduction, it is also the cause of a bit too problematic condition to be the primary power transfer mode. This problem is what we commonly refer to as sliding friction.

A standard gear set transfers its power on the tooth at the peak point of load, which causes the sliding to take place on either of the apex’s sides. The velocity is kept relatively low.

However, a worm gear can only transfer power through its sliding motion when it comes to a worm gear. The worm in the worm gear slides across the wheel’s tooth.

More of the lubrication is picked up when the wheel’s surface is left by the worm’s surface. And the process is started all over again for the next revolution.

In a general gear tooth, the rolling friction needs only a little bit of lubricating film to have the separate two components and the spaces filled in.

Since the sliding takes place on either side of the gear tooth’s apex, a lubricant with slightly higher viscosity is required strictly.

This is necessary because the rolling wear needs to overcome the load. The sliding then takes place at a lower velocity.

The worm on a worm gear set keeps on crashing against the load, enforced on the wheel while turning.

The only possible solution for the worm to not touch the wheel is to have a large enough film thickness so that before the worm is out of the load zone, it can prevent the tooth surface from being wiped off.

You would also need a special lubricant that offers really high viscosity for this. The lubricant must also have a way to not prevent the sliding problem too.

If you are running on a tighter budget, the worm gear would be the best option. Even with frequent use, it’s sure to last you long and has low maintenance. All you need to do is add the lubricant.

We hope after having worm winch gear explained, you’ll have a better understanding of it. Drive safe!

How to Recable a Winch [A Complete Guide]

5 Reasons F150 is A Perfect Off-Roader