There’s a growing shift among consumers people to use eco-friendly appliances to try and reduce the emission of toxic greenhouse gases that are causing global warming.

This trend has also been seen in the vehicle industry, hence the rise in popularity of electric Sport Utility Vehicles (SUVs).

Some of the popular brands that have embraced this challenge of creating electric SUVs that can keep up with the speed and power of their gasoline-powered counterparts.

But for an off-roading enthusiast, are electric SUVs any good? To help you answer this question, here’s an overview of the benefits get for picking an electric SUV.

This way, you’ll clear your mind of any reservations about whether electric SUVs are worth buying.

Are Electric SUVs Good For Off-Roading?

Having enough toque is essential when off-roading. This is why it’s every off-roading enthusiast’s dream to have an SUV that boasts enough pulling power when navigating up the hill or through the sand.

However, diesel or petrol engines don’t deliver this level of performance because they first need to rev up. Turbocharged vehicles also need to build their turbo boost in order to power through a tricky situation.

With an electric SUV such as certain Hyundai vehicles, you shouldn’t experience any issue with pulling power because the electric engine produces instant torque even at low speeds.

This is ideal during off-roading trips because it allows you to tackle anything from sheer slopes to precision rock-crawling.

Therefore, you’ll have a much simpler time going over or passing obstacles. In addition, electric SUVs come with off-road specific software tuning for the electric motor and provide you with a throttle response.

This feature comes in handy when trying to correct the wheel and getting an accurate feel of the vehicle when managing difficult terrain.

Another reason why electric SUVs are a better pick over their gasoline-powered equivalents is that they produce little to no noise when driving.

This is possible because these cars are powered by an electric motor that doesn’t create the loud banging and popping sounds that come from an internal combustion engine burning fuel.

As a result, these cars can drive very silently, hence why they’re perfect for drives where loud noises can disrupt the surroundings or attract unnecessary attention. 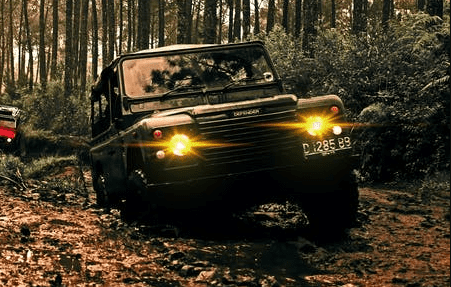 Driving down a hill is often a huge challenge for most off-road drivers, especially when passing through steep downgrades with loose dirt, gravel, or rocks.

When driving through steep hills, this gradual stop will prevent your wheels from skidding or tipping over due to a sudden stop in momentum.

As an off-road driver, one of your greatest concerns would be your SUV breaking down while you’re in the middle of nowhere.

You won’t be as anxious about breaking down when driving an electric SUV because they have fewer components. After all, more parts mean more possible points of failure.

Electric SUVs are also less likely to break down even when traveling through wetter trails with mud and puddles.

Having an elevated intake or a snorkel should be more than enough to keep your engine from getting flooded.

Battery packs that power your electric SUV weigh in at around half a ton. They’re usually placed on your electric car’s floor, and this produces a significant amount of downward pressure.

As a result, this lowers the car’s center of gravity that helps to boost its stability further.

Therefore, you can comfortably drive at greater speeds without worrying about stability issues that might cause an accident.

Thanks to this, your vehicle also enjoys improved handling while driving through rough terrain.

Global warming is a huge concern today, and one way you can try to help the environment is by driving and an electric SUV.

This is because electric vehicles don’t produce any greenhouse gases unlike cars that are powered by an internal combustion engine. Therefore, driving an electric SUV helps you lower your carbon footprint.

The price of fuel has been steadily increasing over the years. As a result, you need to spend a considerable sum of money to run a diesel or petrol engine.

Because fuel consumption increases when you are off-roading or simply driving over rough terrain, you might end up spending a considerable sum of money in the long run.

You can avoid this exorbitant spending on buying fuel by switching to an electric SUV. This is because it’s a lot cheaper (and cleaner) to charge the electric SUV’s batteries.

As a result, an electric SUV’s cost is much lower than its fuel-powered counterparts which further raises the appeal for electric SUVs.

There’s a common misconception that electric cars can’t travel quite a long distance compared to diesel or petrol-powered cars because batteries mi.

However, this is a lie discredited by the 200 kWh Tesla Roadster that can travel for 600 miles on a single charge.

This distance is far, much greater than any achieved by an SUV powered by an internal combustion engine would reach.

This is because electric vehicles usually have two motors; one controls the rear wheels while the other controls the front ones. In addition, these motors work independently of each other.

Therefore, it’s up to the software to define how and when to maximize the use of the electricity available to power the wheels of your electric SUV.

The days of SUVs being powered by internal combustion engines are slowly coming to an end popular, with electric-powered vehicles being seen as the perfect alternative.

These electric SUVs help cut down on carbon emissions and reduce how much you’re spending on fuel.

If you had some reservations about electric SUVs, this comprehensive guide should tell you why getting one is a good choice.

What Size Winch for Jeep [A Detailed Guide]

6 Reasons You Should Tint Windows Of Off-Road Vehicle